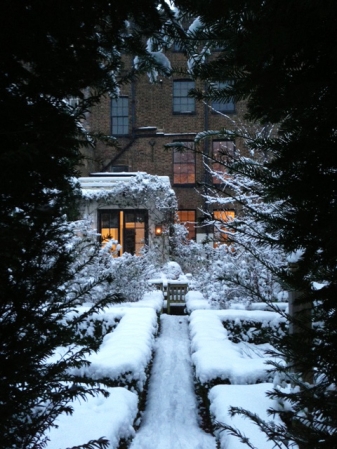 The Garden. A Chronicle.

I have a small urban garden, chronicled in the two-volume Tender. A visitor’s first impression is that of a diminutive, walled garden. True, its high hedges and tall gates make for a feeling of solitude. You do indeed feel hidden. And yes, there is shade and a corridor around the perimeter, and the vegetable patch is laid out in a series of six small beds similar to those of early monastery gardens. At night you can hear your footsteps on the deep gravel paths and the stone terrace. In winter you can see fox prints in the snow. At dusk in midsummer the garden is heavy with the scent of white jasmine and crimson sweet peas. There are bees, butterflies, squirrels, foxes and, two gardens away, a resident woodpecker. But in reality, it is nothing more than just the back garden to a London terraced house.

The garden’s feeling of enclosure and protection – of a secret space – exists partly because of the trellis mounted on top of the old brick walls and the thick growth of ivy that has formed a solid, tangled mass around it. In places, I need to climb a ladder to trim the top and a machete to beat it into submission. At the far end is a row of tall hornbeams, chosen for the piercing green of their young leaves in spring, and the fact that their bright leaves offer reflected light to the neighbouring houses, rather than blocking it as would leylandii.

Small though it is, the garden is split into three distinct enclosures: an old York stone terrace that is home to the rickety, recycled dining table; the diminutive vegetable patch of which I now write and a small, gated section of tranquil, fragrant green and white shrubs. My sanctuary. I should also include the wide garden steps that are currently home to pots of everything from tubs of Tradescant roses and lemon thyme to containers of purple sage, runner beans and wild strawberries. Getting much afternoon sunshine, this space is useful for ripening tomatoes and even, in a good year, aubergines. It is an absurd amount to cram into a tiny city garden, but I like the fact that every centimetre is put to good use.

Every wall is used. An espaliered Doyenne du Comice pear on the South facing wall; a fig in the basement; a Fragola grapevine frames the kitchen doors. I would put something up the kitchen walls if I wouldn’t mean removing the headily fragrant Chinese Jasmine that frames the scullery window. I realise I have created what is effectively an allotment to which I don’t have to travel. But then, the waiting list for an allotment in my part of the world runs into years. When I look at the garden now, with its ivy-clad walls, its rows of radishes, quinces, espaliered pears and its grapevine, not to mention the bed of Arran Victory potatoes and ‘dinner-plate’ dahlias, it is hard to picture it nine years previously, when it was just a patch of ill-mown grass.